A teacher walked a lonely road one day long ago. As he walked one path, he saw a pencil on the ground. Unthinking, he picked it up, put it in his pocket, and carried along his way. He arrived at a small village and took up his post as a school teacher for the local children.
All went well for him until one day a strange child entered his classroom. The child was unlike any he had met before, he did not speak, nor did he play. He just sat silently in the classroom, with watchful eyes on the teacher’s every move. Nobody knew where the boy had come from, or what his name was, so they called him “strangeling”.
The teacher wanted to find out more about the strangeling, so asked the class to write a story about their lives and families. All began their tasks diligently, except the strangeling. The teacher offered the strangeling a pencil (it just so happened to be the same one he’d found all those years before), and the strangeling smiled his strange smile, then began to write.
He wrote pages and pages of dense prose, then stood up and left quietly never to be seen again, taking the pencil with him.
The teacher picked up the strangeling’s story and began to read. He was still reading as his students left for the day, and when they returned the next morning the teacher was still there, with a strange faraway look in his eyes. Nobody knows for sure what became of the story he had read, some say he locked it away, some say he burned it, some say the story became a part of him, but no scrap of it was ever seen.
From that day a change came over the teacher, he seemed to be searching for something, and began collecting pens, pencils, straws, twigs, anything that resembled a pencil. All these he would collect together in a tin, and woe betide anyone who forgot their pencil, as they would be forced to endure the punishment they dubbed the “Russian Roulette of Calligraphic Dysfunction”. Poor unfortunates would reach into the tin, and their choice would determine their punishment. The lucky ones would find a pen that worked well, and they would return to their desks unscathed. Others would select pencils empty of lead, and would return home to find all their possessions had vanished mysteriously. One child was especially unfortunate, he picked what he thought was a pencil, but it turned out to be a twig. As the child looked at the twig, she stood rooted to the spot. leaves sprouted from the twig, and blossomed before her eyes. She tried to run, but found her legs were stiff. She tried to throw the twig away from her, but found it was part of her hand, although her hand began to look strangely wooden. Too late, she realised she had been turned into a tree, and she saw her classmates flee the classroom, all except the teacher, who calmly stood up and cut a twig from what had once been the girl’s hair. She saw the faraway look leave the teacher’s eyes as he calmly whittled the twig into a pencil and added charcoal from the grate as a lead.
The teacher turned to the girl and said “sorry, and thank you, the enchantment of the lost pencil was difficult to break, but I have finally done it! I’m free!”
The teacher was seen rushing from the village clutching the tin of pencils, nobody ever saw him again. Some say he leaves rogue pencils for unwary travellers to find, perhaps that’s the truth, but somewhere out there is a school house, in a long abandoned village, with a tree growing right through the centre of it. There are many stories of how that tree came to grow there, each as unlikely as the next, but whatever the story, nobody is willing to cut it down or prune its branches… 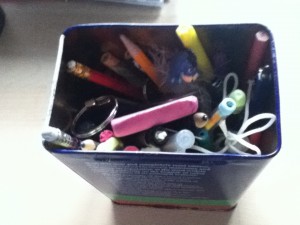